I took the inspiration for the headline of this article from the Netflix series ‘To all the boys I loved before’. Frankly, I’ve loved far more dogs than boys in my 23 years, and owned more pets than I’ve had serious relationships. First revelation? Dogs rule, boys drool. Fact.

The dogs lived outside in a huge purpose built kennel with the run of the yard – it was pretty common in rural areas in the 90s, despite being a totally terrifying thought now. Being crossed with working breeds, they preferred the great outdoors, and would freak out if they had to be brought inside.

I remember being around four years old and my dad balancing me on Max’s back like a horse – he was the size of a Shetland pony, actually. His thick fur would come out in clumps in the summer months, as a double coated breed. I remember heading down to the playing fields with my parents where they would groom six more dogs’ worth of fur out of their coats, which local wildlife would later use for nests.

Each time I came home, there would be two huge heads poking through our ornate iron gate for a fuss. I firmly believe this is simultaneously the reason we were never burgled in the noughties.

Best friends and thick as thieves, Max and Kyra were often found getting themselves into trouble. One day, dad had said goodbye to the dogs and walked my brother and sister to school, and by the time he got there, the head mistress told him our dogs were causing havoc on the school playing field. They’d managed to scale the six foot fence of the garden and go gallivanting around town!

I was around seven or eight when Max and Kyra passed away within a year of each other. Max’s hips had failed him – which is common in shepherds – but he’d defied the average age of a great dane, living until he was 14. Kyra died the following summer following a stroke.

These two gentle giants were the first to teach me that the best things come with four legs, waggy tails and wet noses. They taught me friendship, responsibility and compassion from such an early age. And most importantly, they taught me that I would never be able to live without a dog.

A few months later, we got in touch with a rescue organisation which specialised in Staffordshire Bull Terriers, and we went to an event where we met a little red staffie named Trixie – terrible name. We changed it. More on that later.

We were able to take little Trixie for a walk around Trentham Gardens, before settling down at the cafe for a cuppa to see if she liked us as much as we liked her.

Trixie came home with us a few weeks later, and we named her Lyla after the Oasis track. 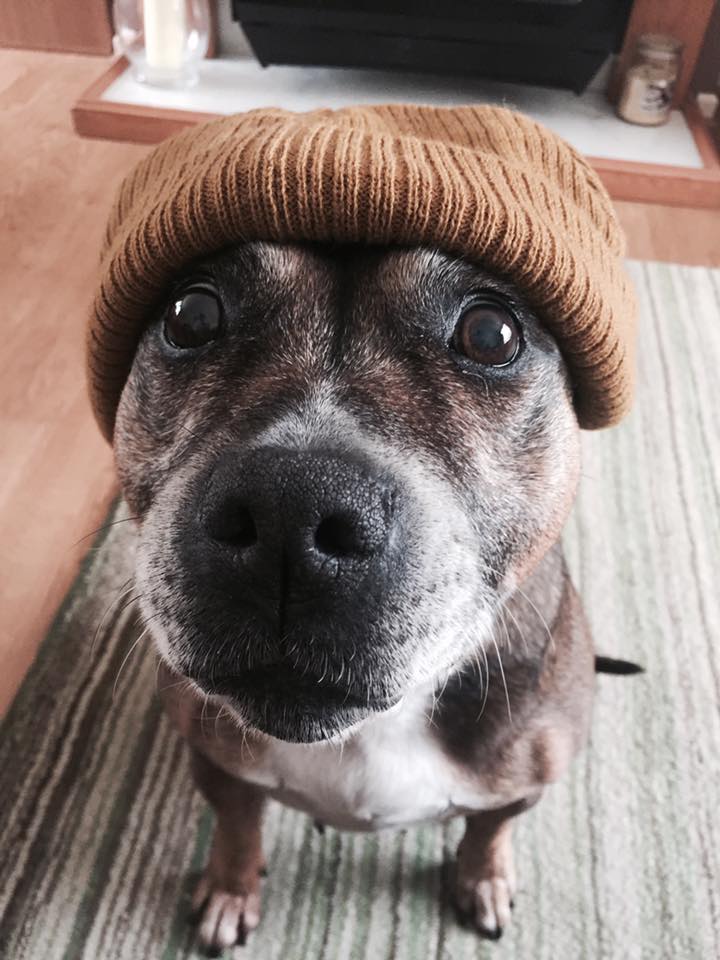 Far better name – you wouldn’t have caught me yelling ‘Trixie’ across the playing fields.

Lyla wasn’t my biggest fan, and my love was pretty unrequited for a while. I was heading into my pre-teens and can only assume I stunk of hormones.

She was around three years old when we adopted her, having previously been used as a puppy machine. She had scars under her legs where she’d been tied to a step ladder and forced to mate, so it’s no wonder she was wary of being touched.

But before long, Lyla and I were best buds. She would sneak into my bed for a cuddle in the mornings, and I swore to always share my yoghurt pots with her.

Lyla was by far our most well behaved dog – ever. She never ate anything she wasn’t meant to, rarely required a trip to the vet, walked beautifully on her lead, and would let you dress her up in silly hats so long as you had a Kong full of peanut butter.

But in Summer 2017, Lyla was a victim of a dog attack in the middle of town. Police were in possession of a mastiff-breed dog, which broke free from their grip when it saw Lyla. It took six adults to prevent the dog from biting Lyla with any real force, but the ordeal certainly shook her – and all of us – up.

After that, she wasn’t the same dog. She became quite ill quite quickly, suffering liver failure and jaundice which we discovered was a result of cancer. The vet believed the stress of the attack had triggered the disease, and we lost her a few weeks later at the age of 13.

She had the best last day doing the things she loved, including sunbathing in the garden, enjoying a pork roll, and having a great big fuss.

Lyla taught me perseverance and patience, as well as one of my first experiences of grieving. I was old enough to truly understand the loss, which hurt more than anything I’d ever experienced previously. As a rescue staffie, she taught us what a beautiful and misunderstood breed they are, and that a dog lives in the present – which is something we should all take note of.

Two weeks passed and I couldn’t bear the lack of pitter patter paws when I put my key in the front door.

Dad said we weren’t getting another dog. “It’s too hard when they go,” he’d said.

But all that grief was born from love – and why would you deny another dog in need of saving of that love? Lyla would have wanted us to show another dog what it was like to be unconditionally adored.

We rescued Phoebe from a local shelter after falling in love with the skinny little staffie – who frankly, turned out to be bigger than we’d anticipated.

Phoebe didn’t know her own name – nor the typical trigger words a dog’s ears would usually prick up at, like walkies or dinner. She displayed OCD and self-harming traits, and was incredibly poorly.

On her first night with us, she had diarrhoea all over the landing, and I have never smelled anything so horrific in my life. We put it down to first night anxiety, reassured her she was okay and that she wasn’t in trouble, and kept an eye on her for the day.

But then it happened again some weeks later, and again a few weeks after that. Hundreds of pounds, six stool samples and a dozen vet trips later and she was prescribed antibiotics and steroids for a gut bacteria. Our bet is that her previous owners got rid of her because they didn’t want to pay the vet bills, or incredibly naively just thought she was being naughtly by toileting in the house.

Once Phoebe was back on her paws health wise, we were still teaching her how to be a dog. And when the opportunity arose to adopt a puppy from the same rescue centre, we thought it would be great for both of them. 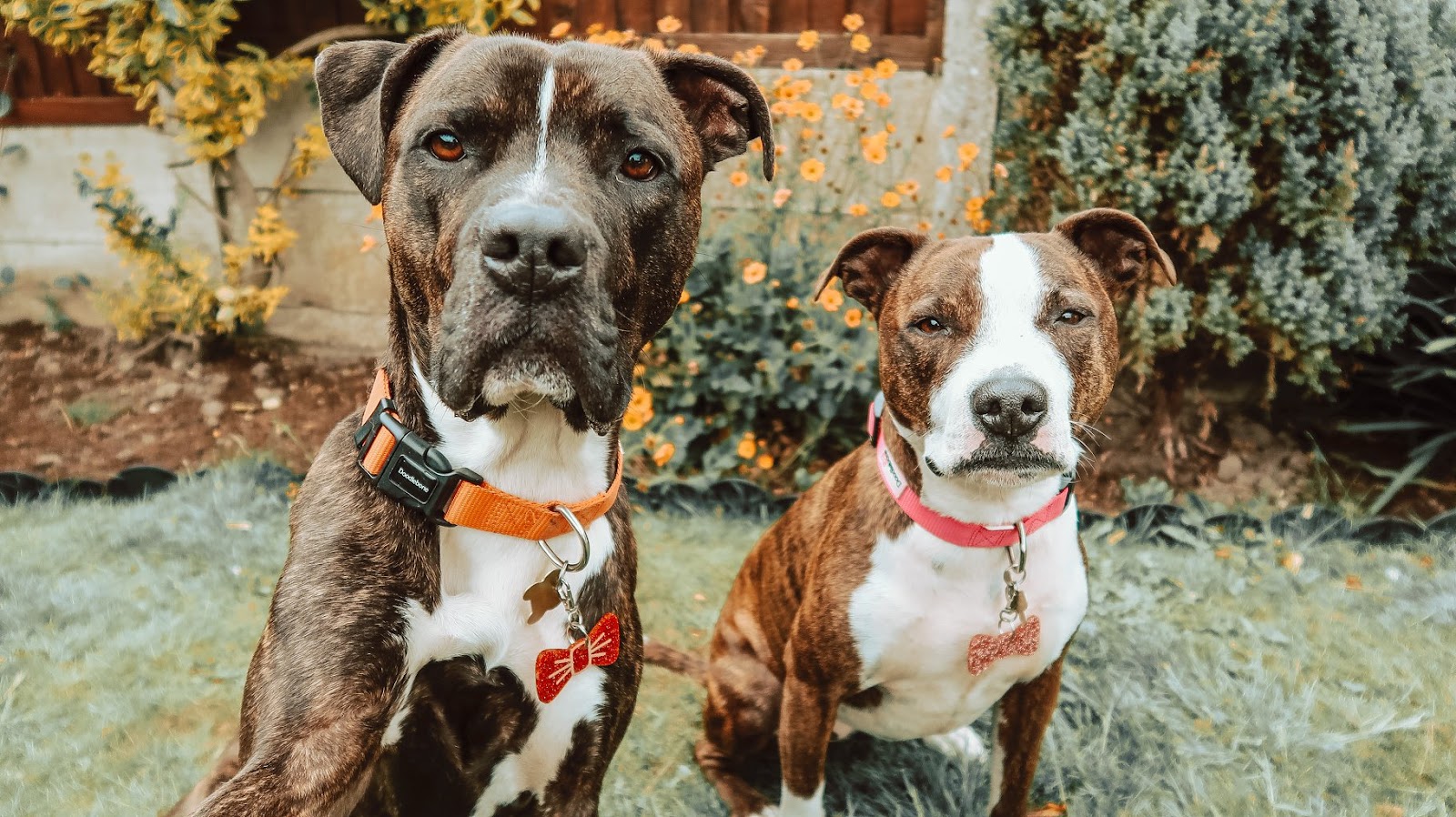 Frank joined the pack in February 2018, and was my first experience of training a puppy. Phoebe mothered him – despite never having pups herself – but would often grouch when he wanted to cuddle up to her at night.

It took 18 month of training before Phoebe and Frank got in bed together unprompted – and they’ve been inseparable ever since, despite having chalk and cheese personalities.

Phoebe is independent, sassy and strong, whereas Frank needs you within a two metre radius at all times. Frank is also the mischievous one, known for stealing and eating things he absolutely shouldn’t, which has included five metal tealight candles and several jigsaw pieces. We took up jigsaws during lockdown, and out of the seven we have, not a single one has all 1000 pieces.

Phoebe and Frank joined the family when I was in my 20s, and they truly are my babies. Frank especially has taught me the power of a blooming big hug and emotional attachment, whilst Phoebe has taught me about being confident and independent. She’s such a feminist.

They’ve gotten me up and out of the house on some of my darkest days and reminded me of the importance of adventure, and how powerful it is to stop and enjoy nature.

They’ve taught me about nutrition – after I would spend more time preparing their dinner and baking healthy treats than I would cooking my own tea, and about taking care of my body. Sleep is a necessity, so nap together. And most of all, they’ve taught me to always be authentically myself – quirks and all – because they’re certainly not afraid to show their goofy side.

You may also enjoy:

END_OF_DOCUMENT_TOKEN_TO_BE_REPLACED

The four Edgard and …

Why Phoebe and Frank …

Inside the Paws for …

Pizzle sticks – what are …